Wood burning stove is a heating appliance capable of generating heat through wood fuel or wood generated biomass fuel such as wood pellets. It is usually made up of a strong metal such as cast iron or stainless steel. It has a closed fire chamber, brick base and air controller. The 1st wood burning stove was patented in the year 1557.

The wood used in the wood burning stove is measured in the unit of Cord. A cord is a measure of 128 cubic feet. It is like tightly packed wood in the 4’*4’*8’ height, width and depth respectively. Both hardwood and softwood can be used for wood burning stove. However hardwood derived from trees such as oak will burn at a slower rate and thus are sustained for a longer period of time making it economically viable also. On the other hand the softwood derived from the conifers burn at a faster rate and generates little higher heat output making it more popular. However the softwood creates more soot and creosote in the wood stove, chimney and flue thereby asking more maintenance. Due to its different properties its usability is different. Hardwood is more popular in heating whereas softwood in cooking. 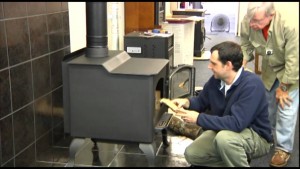 So the question arises should we burn wood or should we not. The Wood burning stove provides green energy but it does have adverse effect on the environment.

However along with carbon dioxide the wood produces a large quantity of soot, particles similar to that emitted by diesel cars. This has side effects like causing cancer in human beings along with breathing problems.

In some places like South America, Central America and Caribbean the Wood burning stoves are built inside the house without proper ventilation. The smoke released from the stove stays inside the house and the same is breathed by its inmates causing breathing problems and sometimes even cancer. Reports by the World Health Organisation say nearly 2 million people are killed each year due to indoor air pollution caused by open fire cooking. besides cutting of the large amount of trees for firewood also endangers the ecosystem causing unexpected changes in the atmosphere and natural calamities like hurricanes and cyclones.

So in Urban Area wood burning stoves are not the environment friendly choice!

Related Article:  Warm Up To a Wood-Burning Stove This Winter